In 2009 he joined The Smashing Pumpkins front man Billy Corgan in the studio to demo songs for what would become the band's eighth album, Teargarden by Kaleidyscope.[2]

Tulin met Corgan in 2008 when the latter was recording music with The Seeds front man Sky Saxon. In an interview with the band's official website, Tulin praised these sessions with the band saying they were times of "limitless possibility" and that the new music was "...interesting, innovative, and arresting."[3] 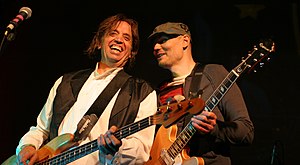 Tulin performs on stage with Billy Corgan at a benefit concert for Sky Saxon.

Following the death of Sky Saxon in June 2009, Tulin took part in Corgan's tribute band Spirits in the Sky which played a show on July 24, 2009.[4] Following the success of the show, Corgan had the band play a small tour of extremely small venues in California in August 2009. These shows included Jane's Addiction guitarist Dave Navarro on guitar with Corgan, as well as many of The Smashing Pumpkins' longtime collaborators. In November 2009, Tulin played in the band Backwards Clock Society with Billy Corgan and longtime Smashing Pumpkins collaborator Kerry Brown to raise money for Laura Ann Masura, a former Smashing Pumpkins Fan Club chief, who suffered from a serious motorcycle accident.[5]

In March 2010, following the departure of Smashing Pumpkins touring bassist Ginger Pooley to raise her newborn infant, Tulin was announced as a temporary live bassist until a permanent replacement could be found.[6] During this time, Tulin played his only full-length show with The Smashing Pumpkins on April 17, 2010 in celebration of Record Store Day. A few days later, Tulin played "Widow Wake My Mind" with the band on The Tonight Show with Jay Leno. In May 2010, the band officially announced Nicole Fiorentino as the newest official member of the band.[7]

In an interview with Ultimate Guitar, Corgan confirmed that Tulin's bass parts were featured on the first EP of Teargarden by Kaleidyscope - Vol. 1: Songs for a Sailor.[8]

In late 2010, Tulin was recording and performing with The Electric Prunes, who were signed to independent label Starry Records started by Kerry Brown.[9]

On February 26, 2011, Tulin collapsed while helping out at the Avalon Underwater Clean-Up in Avalon, California. Baywatch Avalon and Avalon Fire Department medics responded immediately, but he could not be revived and was pronounced dead. He was 62 years old.[10]

Retrieved from "https://spcodex.wiki/w/index.php?title=Mark_Tulin&oldid=68558"
Category:
Hidden categories:
Cookies help us deliver our services. By using our services, you agree to our use of cookies.