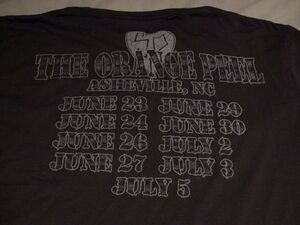 The Orange Peel residency was a series of 9 shows at The Orange Peel in Asheville, NC, US, from June 23 to July 5, 2007. It was the first public performance on American soil since the 2000 disbandment, and part of the larger Zeitgeist tour that extended through the end of the year. The shows played Zeitgeist songs and a handful of classics, along with numerous new songs. "?" was written and performed during the residency. Corgan later recounted:

Retrieved from "https://spcodex.wiki/w/index.php?title=The_Orange_Peel_residency&oldid=55508"
Category:
Hidden category:
Cookies help us deliver our services. By using our services, you agree to our use of cookies.