James Joseph Chamberlin (born June 10, 1964) is the drummer for The Smashing Pumpkins. Following the 2000 breakup of the band, Chamberlin joined Pumpkins frontman Billy Corgan in the supergroup Zwan and also formed his own group, the Jimmy Chamberlin Complex. In 2005, Chamberlin joined Corgan in reforming The Smashing Pumpkins; he eventually left the group in March 2009, though he returned again in 2015 for a summer tour. He performed in the group Skysaw until 2012. He is currently active under the Jimmy Chamberlin Complex name. In addition to his current work as CEO, Chamberlin has joined Chicago jazz saxophonist Frank Catalano for a string of 2013–15 performances[1] in the Chicago area. An EP by Catalano and Chamberlin Love Supreme Collective - EP was released on July 29, 2014.

Chamberlin, who originally trained as a jazz drummer, cites jazz musicians Benny Goodman, Duke Ellington, Gene Krupa, and Buddy Rich, as well as rock drummers Keith Moon, Ian Paice, and John Bonham as major influences on his technique. While he is known as "one of the most powerful drummers in rock,"[2] he primarily strives for emotionally communicative playing.[3] In 2008, Gigwise named Chamberlin the 5th best drummer of all time.[4] In 2016, Rolling Stone ranked Jimmy Chamberlin 53 on their list of "100 Greatest Drummers Of All Time".[5]

Chamberlin was born in Joliet, Illinois, one of six children.[6] His father and his older brother Paul were both active in jazz bands, playing clarinet and drums respectively, and his brother Paul is still an active rock drummer, with a local cover band, Chasing Amy.[7]

Chamberlin began drumming at age 8, and credits his brother as his entry point.[8] His early instruction included Latin, Brazilian, and big band techniques, but focused on jazz, under the tutelage of future Yanni drummer, Charlie Adams.[9]

Chamberlin left home at age 15[10] and joined a series of local bands.[6] Although his early music career proved profitable, Chamberlin's father pressured him into going to college. In 1994, Chamberlin revealed that he had been estranged from his father for seven years.[10] After three years with the show band JP and the Cats, Chamberlin, wearied by the touring schedule, quit and got a job building custom homes with his brother-in-law.[6] Before long, he joined the Smashing Pumpkins.

The Smashing Pumpkins were looking for a live drummer to open a show at the Metro, a Chicago club. Chamberlin and Billy Corgan met through a mutual friend, and Chamberlin expressed cautious interest, later recalling:

So I went out and saw the band – Billy, James, and D'arcy – playing at Avalon with a drum machine. Man, did they sound horrible! They were atrocious. But the thing I noticed was that not only were the song structures good, but Billy's voice had a lot of drive to it, like he was dying to succeed. So I ended up driving from work every Wednesday to rehearse with them.[6]

Corgan had his own concerns:

He was wearing a pink t-shirt, stonewashed jeans, he had a mullet haircut, and he was driving a 280Z, and had yellow drums. We were sort of looking each other in the eye thinking, 'This ain't gonna happen, this is not the guy.' [But] he'd learned all our songs, as only Jimmy can, off the top of his head, and, within one practice, we were ready to play. It was amazing. We just knew right away. He's that good.[11]

Chamberlin made "tons of cash" as a carpenter,[6] before giving up the job to move to Chicago and devote himself to the band. Chamberlin's entry quickly pushed the band toward a more powerful, intense sound. The first two Smashing Pumpkins albums, Gish and Siamese Dream, were performed almost entirely by Corgan and Chamberlin alone. 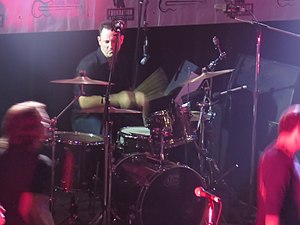 During this period Chamberlin struggled with substance abuse. During the recording of 1993's Siamese Dream in Marietta, Georgia, Chamberlin often disappeared for days at a time into the drug underworld of Atlanta, while the rest of the band feared for his life.[12] He later said of his drug addiction that "It's pretty textbook [...] Guy makes it in rock band, gets very full of himself, starts thinking he's indestructible, and all of a sudden he destroys himself."[13]

In the midst of the lengthy world tour supporting 1995's multi-platinum Mellon Collie and the Infinite Sadness, Chamberlin's father died, and his substance abuse hit a fever pitch.[14] Of this period, Chamberlin later said, "I learned that escapism was better than emotion, and that's where I hid... It got to the point that I really didn't care. Life was scary for me."[14] Prior to shows scheduled July '96 at Madison Square Garden in New York City, Chamberlin and touring keyboardist Jonathan Melvoin overdosed on heroin; Melvoin subsequently died, and Chamberlin was kicked out of the band, ostensibly to protect his health.[15] Corgan later told MTV News that Chamberlin had already overdosed on two different occasions during the Infinite Sadness tour prior to the July 1996 event, but that the band had managed to keep those situations private.[16]

In October 1998, Corgan convened a band meeting in which Chamberlin was reinstated as the group's drummer, and the band decided to break up after one more album and tour.[12] The band yielded two albums in 2000, Machina/The Machines of God and the freely distributed Machina II/The Friends & Enemies of Modern Music, before performing a farewell show in Chicago on December 2, 2000.

Zwan and other projects[edit | edit source]

Chamberlin went on to form Zwan in 2001 with Corgan. Although Chamberlin predicted that "the band's going to be huge,"[13] Zwan produced only one album, Mary Star of the Sea, before disbanding in 2003. Chamberlin formed his next project, Jimmy Chamberlin Complex, in 2004, and released its first studio album, Life Begins Again, in 2005. Chamberlin stated that, with the Jimmy Chamberlin Complex, "I just wanted to make music and not really be constrained to making a Zwan or a Pumpkins record.".[17]

While giving drum clinics in late 2009, Chamberlin announced his next project, a band called This. Describing the music as 'progressive, symphonic pop' he reported that the band, also including multi-instrumentalists Mike Reina and guitarist Anthony Pirog, would record with Roy Thomas Baker in Washington, D.C. in early 2010.[18]

This released their first album, a six-track release titled Great Civilizations, on November 1, 2010 as a digital download only, on both Amazon and iTunes. No official release announcement was made even on the band's official website. Downloads from iTunes and Amazon were removed after there was confusion over the band's name. As a result they rebranded as Skysaw.

In March 2011 it was announced that the Skysaw full-length LP would be released on Dangerbird Records. On June 21, 2011, the new, extended 10 song LP Great Civilizations was released. The band subsequently toured with label mates Minus The Bear, performed hometown shows at Chicago's Metro and the Black Cat in Washington, DC, and performed on the JBTV Television Show in Chicago, IL.

Billy Corgan announced at an April 2004 solo performance that he and Chamberlin intended to work together again in the future. After appearing on Life Begins Again, Corgan announced plans to "renew and revive" the Pumpkins through a full-page advertisement in his hometown's newspaper, the Chicago Tribune, on June 21, 2005.[19] Chamberlin contacted Corgan to accept, and on February 2, 2006, MTV.com reported that he and Corgan had signed a new management deal with the Front Line Management, with a spokesperson confirming they had signed under the name "Smashing Pumpkins".[20]

Chamberlin and Corgan, without the other original members, decided to record an album alone. They played their first show in Paris on May 22, 2007, with three new band members. On July 10, the new album, Zeitgeist, was released. Over the next year and a half, the band released more recordings and toured extensively.

On March 20, 2009 the Pumpkins' website announced that Chamberlin was leaving the band. Chamberlin released a blog stating that he left as he felt that the band would not further his commitment to music.[21]

Chamberlin again joined the band as a touring member for the 2015 End Times Tour.[22] Chamberlin remained in the touring line-up for the subsequent In Plainsong Tour in 2016 [23]

Chamberlin and former guitarist James Iha rejoined on a permanent basis in February 2018.[24]

Chamberlin comes from a jazz background, and he notes jazz musicians Benny Goodman, Duke Ellington, Gene Krupa, Buddy Rich, and Billy Cobham[25] as influences.[7] He has also been compared to jazz drummer Dennis Chambers for his "quick hands, furious snare rolls, and crackling rimshots."[9] In general, he is one of the few hard rock drummers to combine a driving backbeat with jazz-like flourishes. When asked about his influences in 2007, he responded:

Aside from the obvious – Keith Moon, John Bonham, Ian Paice – I would have to say Tony Williams, Elvin Jones, any of the jazz greats – Gene Krupa, those people. I think, more and more, as I get older, I've developed my own rock style and I tend to pull more stuff from Elvin Jones and Tony now that I can incorporate it into a rock arena and kind of modernize it.[26]

Other drummers that influenced Chamberlin around the recording of Zeitgeist included Bobby Caldwell of Captain Beyond, Lalo Schifrin's Dirty Harry soundtrack, Weather Report, and Return to Forever's Lenny White.[27]

Chamberlin prefers not to use Pro Tools or click tracks;[28] He uses the slide technique for double strokes on the bass drum.[29]

Bandmate Billy Corgan has said of Chamberlin, "he's up there with Bonham, you know, that level of drummer, who has been able to play a variety of music and have his style impact the way people play drums. That's the hallmark of a great drummer. And, right now, I think, pound for pound, he's the best drummer in the world."[30]

Jimmy Chamberlin talking through his set-up at rehearsals for the Shiny and Oh So Bright Tour.
On the Smashing Pumpkins album Zeitgeist and subsequent tour, Chamberlin used a Yamaha Maple Custom Absolute kit with 60° bearing edges, rather than the standard 45°. His kit consisted of two snares (5x12 and the main snare, his 5.5x14 "Signature" model – Yamaha SD-2455JC), six toms (12x14, 8x10, 9x13, and an 8x8 above his floor toms which are 16x16 and 16x18), a 16x22 bass drum.

Around 2000, as seen in "The Everlasting Gaze" video, he switched from Sabian to Zildjian cymbals. His setup included four crash cymbals (a 15" thin and three Zildjian A customs – 15", 18", and 19"), an 8" splash cymbal, 15" New Beat hi-hats, a 20" China High, a 22" K Constantinople medium ride, and a 22" riveted swish knocker. He occasionally used a triangle on his kit, mounted above the hi hats. Chamberlin's drumheads are Remo coated Ambassador on snare-side, clear Emperors on tom batters with clear Ambassadors underneath, with a Powerstoke 3 on the bass drum batter and Vic Firth 5B sticks. His signature snare drum is popular with other drummers – Chad Smith has been known to use it as a second snare drum.[27]

On April 6, 2011, Chamberlin announced[31] that he had switched from long-term drum manufacturer Yamaha to Drum Workshop. He has ordered[32] a custom "prototype" Copper Lacquer Specialty with Chrome Hardware. The Shells are a ply combination of VLT Maple and Mahogany with no reinforcement hoops. The kick drum hoops are Solid Black Lacquer. The sizes are 5x8, 7x10, 8x13, 10x14 rack toms; 14x14, 16x16 floor toms; 16x22 kick and with a matching 5.5x14 snare; and a stainless steel 6.5x14 snare.

In 2017 Chamberlin has switched from Zildjian cymbals to Istanbul Agop cymbals. In 2018, Chamberlin returned to Yamaha Drums.

Retrieved from "https://spcodex.wiki/w/index.php?title=Jimmy_Chamberlin&oldid=69660"
Categories:
Hidden categories:
Cookies help us deliver our services. By using our services, you agree to our use of cookies.