The December 1990-March 1991 Smart Studios sessions was the proper recording sessions for The Smashing Pumpkins debut studio album, Gish. A number of songs were recorded aside from the ten album tracks and the eleventh hidden track (which was recorded live in the monitor room): "Slunk", "Blue" and "Jesus Loves His Babies" were outtakes intended for B-sides in 1991, although the later never appeared on a release; "Chump" is an alternate mix of "Slunk" which featured Jimmy Chamberlin on vocals, found as filler on various bootleg tapes; "Pulseczar" dates from these sessions, meant as a demo but appearing on Earphoria; likewise on Earphoria, "Why Am I So Tired" is noted as a live in-studio demo, thus it's probable that James Iha and D'Arcy Wretzky's parts are intact (Iha is probably the guitar panned left); a new version of "La Dolly Vita" was attempted but abandoned; "Razor" was recorded, but remains unreleased. 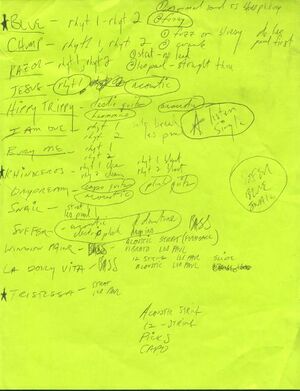 Recording Gish was done in spurts. "We would drive up to Madison for four days at a time — or six days at a time. We had no money, so Jimmy and I were staying with some really nice college girls who let us stay in their house for free. That gave us a little more money for the record. The studio was $500 a day, and that was with Butch included. If my memory serves me correctly, it took us 41 days to record the album and seventeen days to mix."[1]

"Billy was very ambitious," Vig remembers. "He wanted to make everything sound amazing and see how far he could take it; really spend time on the production and the performances. For me that was a godsend because I was used to doing records for all the indie labels and we only had budgets for three or four days."[2]

"Billy was 'green' only in the sense that he didn’t necessarily have handson experience, but he knew what he wanted," Vig continues. "He's a big fan of Queen and ELO, and those records had big produced sounds, and as much as he didn’t know maybe from an engineering standpoint how to do it, I think sonically what he heard in his head, he understood."[3]

The band would collectively hash out the arrangements through exhaustive rehearsals, but when it came time to record, Corgan laid down the majority of the parts. This often-talked about procedure became a standard practice. "As good as D'arcy and James are, it was just going to sound better if Billy played it," says Vig. "I think it probably caused some friction, but it was something they dealt with and accepted in the band."[3]

The drums were the one component of The Smashing Pumpkins that Corgan could not reproduce. A jazz drummer by trade, Jimmy Chamberlin paired swing and subtlety with a thunderous intensity reminiscent of legends like Keith Moon and John Bonham.

At the time, Vig didn't have a tremendous amount of money to make significant cosmetic changes to Smart, but the shape of the studio's live room—all odd angles and no parallel walls—made for an incredible sound, inspiring the live feel of the band’s studio performance. Gish was recorded onto a two-inch, 24-track Otari MX80, but few things were recorded through the studio's newly acquired 56-input customized Harrison console (Vig relied largely on outboard Summit and API preamps) though he says that Harrison's versatile EQ section and exceptional high- and low-pass filters made it easier to quickly carve out pockets in the mix for Corgan's unique tone. When all was said and done, Gish cost around $20,000 to produce, and took just over 30 days to record.

"For me that was the equivalent of making a Steely Dan record," laughs Vig who, two months after wrapping production on Gish, traveled to Los Angeles to record Nirvana's Nevermind. "Having that luxury to spend hours on a guitar tone or tuning the drums or working on harmonies and textural things ... I was over the moon to think I had found a comradein- arms who wanted to push me, and who really wanted me to push him."[4]

The band loaded into the studio with a modest amount of gear, most of which can be seen in their first few videos. On stage, the band's signature sound was rooted in Corgan and Iha's mid-'70s Strat/'87 Les Paul combination, but the recording centered around Corgan's rig: An early '80s Marshall JCM 800 2203, known as the "Soul Head," run through Marshall 1960A cabinets, all purchased off "some stoner guy" in Chicago for $800. The KT88 tubes in the JCM produce a round, creamy tone that, when used in conjunction with an ADA MP-1 tube preamp, produced the Gish tone. Using the low input side of the JCM, Corgan would turn the master volume all the way up, and then use the preamp's volume to make micro adjustments. A host of effects, from the Fender Blender to the Phase 100, were folded in for extra fuzz and sweep comb filtering. The bass parts were recorded with Wretzky's black Fender P-Bass—dubbed the "Rat Bass" for the scattering of white rat stickers all over the face—and played through a Trace Elliot AH300SM.

Chamberlin has been a Yamaha endorsee since 1993, but back then his setup was a Pearl DLX Series kit with a 16x22-inch kick and a Yamaha steel snare. As Chamberlin remembers, the kit was miked with Sennheiser 421s on the toms, Shure SM57s on the snare, an AKG D112/Electro-Voice RE20 combo on the kick, and AKG C414s as overheads.

As for production, Gish was recorded onto a two-inch, 24-track Otari MX80, but few things were recorded through the studio's newly acquired 56-input customized Harrison console.

Retrieved from "https://spcodex.wiki/w/index.php?title=December_1990-March_1991_–_Smart_Studios&oldid=10282"
Categories:
Hidden category:
Cookies help us deliver our services. By using our services, you agree to our use of cookies.