Act IV: A Tribute To The Smashing Pumpkins

From SPCodex, The Smashing Pumpkins wiki
(Redirected from Act IV)
Jump to navigation Jump to search 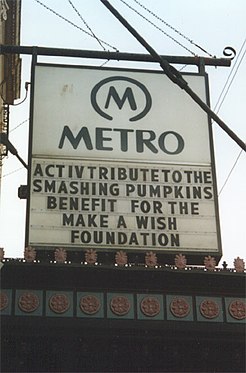 Act IV: A Tribute To The Smashing Pumpkins or simply Act IV is the name of a tribute project organized by fans of The Smashing Pumpkins, which was created on the heels of what was believed to be the band's final shows back in 2000. The aim of the organizers is to celebrate the band's music and past charity work, while promoting new music inspired by The Smashing Pumpkins. To this end, most of the artists involved in Act IV projects are not tribute bands per se. Most of them have their own original music, which they are encouraged to showcase. The artists who have submitted tracks and/or performed for Act IV projects are from a variety of musical backgrounds, and come from all over the world.[1]

Act IV's organizers have put together two Smashing Pumpkins tribute charity concerts at The Metro in Chicago during July 2001 and 2002, as well as various grassroots CD compilations. All profits, if any, from Act IV projects go to the Make-A-Wish Foundation of Illinois. This tradition comes from The Smashing Pumpkins concert on July 7, 1998 in their hometown of Chicago, where they donated all the profits to Make-A-Wish during their Adore charity tour.[2]

The name Act IV comes from the fact the final show at The Metro was split into three acts, so the tribute served as the fourth. By sheer coincidence, the very first venue Corgan's previous band The Marked played at in Tampa, Florida was also called Act IV.

Retrieved from "https://spcodex.wiki/w/index.php?title=Act_IV:_A_Tribute_To_The_Smashing_Pumpkins&oldid=9935"
Category:
Cookies help us deliver our services. By using our services, you agree to our use of cookies.