Help us build the world's largest knowledge base for The Smashing Pumpkins and related acts!
2,181 articles: 886 songs • 121 albums • 78 studio sessions 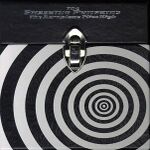 The Aeroplane Flies High is a five-disc box set released in 1996, containing expanded versions of all five Mellon Collie singles. Rolling Stone wrote "There is no filler here. These supposedly second-string tracks [to Mellon Collie] are keepers" and that "the ballads are as gorgeous as anything Corgan has ever written". The 2013 reissue delivered an astounding 90 additional tracks and a bonus DVD. The box reached number 42 on the Billboard charts, and sold 300,000 units (1.5 million discs), generating a platinum status.

"X.Y.U." is one of the heaviest songs from The Smashing Pumpkins' third studio album, Mellon Collie and the Infinite Sadness. The song was recorded in one take, live for the record with drum and vocal overdubs added later. The title means "Ex, Why You?", but is also a play on the spelling of Russian obscene word "хуй" (pronounced "hu:i") that is translated as "penis". Other versions of the song exists, such as "X.Y.U. (Take II)", and the extended "X.Y.U. Medley" performed on October 31, 1998 which bundled in teasers of "The Ethers Tragic", "Where Boys Fear to Tread" and "Never Say Never" (by Romeo Void).