Michael William Byrne (born February 6, 1990) is a former drummer for The Smashing Pumpkins. When Pumpkins frontman Billy Corgan called for rehearsals to replace Jimmy Chamberlin, Byrne auditioned and was chosen out of thousands of applicants. He played drums in Sky Saxon tribute band Spirits in the Sky for six shows in August 2009, along with Corgan, Kerry Brown, Kevin Dippold, Mark Tulin, Linda Strawberry, Ysanne Spevack, Mark Weitz, and Dave Navarro, and also performs drums on the Pumpkins project, Teargarden by Kaleidyscope. As a part of Teargarden, Mike contributed drumming duties on Oceania, the Pumpkins' eighth full-length album. On April 17, 2010, Byrne played his first show under the Smashing Pumpkins moniker in celebration of Record Store Day.[2] 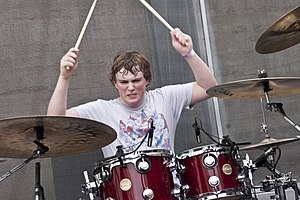 Byrne drumming with the Smashing Pumpkins in 2010

On August 17, 2009, he was officially named as the new drummer for the Smashing Pumpkins.[4][5] The Pumpkins were already one of his favorite bands, with Jimmy Chamberlin among his most influential drummers. Byrne's YouTube channel, which he created three years prior to joining the band, had been "MarquisinSpadez", a reference to the song "Marquis in Spades", from the Smashing Pumpkins' Zero EP.[6]

In June 2014, Billy Corgan reported that Byrne had left the band.[8]

Byrne cites some of his influences as The Cure, Maserati, Maps and Atlases, and Pelican. He enjoys post-rock and math rock.[9]

With the Smashing Pumpkins

Retrieved from "https://spcodex.wiki/w/index.php?title=Mike_Byrne&oldid=71287"
Category:
Hidden categories:
Cookies help us deliver our services. By using our services, you agree to our use of cookies.