Ginger A. Pooley (née Reyes, born April 22, 1977) is an American rock musician who played bass for The Smashing Pumpkins from from 2007 to 2010.[1] More recently she has played bass for Gwen Stefani and Lea Michele. She is an artist and songwriter who has released solo music under the name Ginger Sling. She was also part of the female punk band the Halo Friendlies.[2] She has toured all over the world and her music has been placed on many television shows and films. She lives in Los Angeles with her husband and daughter where she continues to create music for various projects. 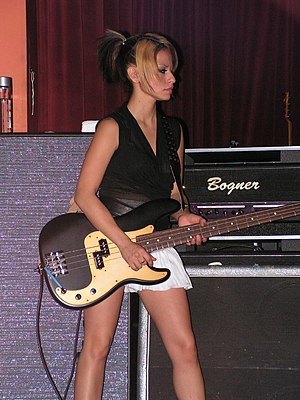 Pooley has taken part in three Smashing Pumpkins music videos: "Tarantula", "That's the Way (My Love Is)" and "G.L.O.W."

In March 2010, Pooley left The Smashing Pumpkins to focus on her family, stating:[4]

Ginger made a guest appearance during the Smashing Pumpkins' Record Store Day performance on April 17, 2010 in Hollywood, CA. She briefly returned to her duties and played bass during the rendition of "Bullet with Butterfly Wings".[5]

During The Smashing Pumpkins' concert on February 16, 2008, at the O2 Arena in London, Billy Corgan announced that Reyes had recently become engaged. She married Kristopher Pooley on June 22, 2008, in Los Angeles. Kris is a professional musician who toured as Gwen Stefani's keyboardist and joined the Smashing Pumpkins on their 2008 20th Anniversary tour.

On April 6, 2009, it was announced on The Smashing Pumpkins' official website that Ginger and her husband Kris were expecting their first child later that year. It was announced via Twitter that on October 17, 2009, she gave birth to a baby girl, Talula Victoria Pooley.

Retrieved from "https://spcodex.wiki/w/index.php?title=Ginger_Pooley&oldid=73649"
Category:
Hidden categories:
Cookies help us deliver our services. By using our services, you agree to our use of cookies.